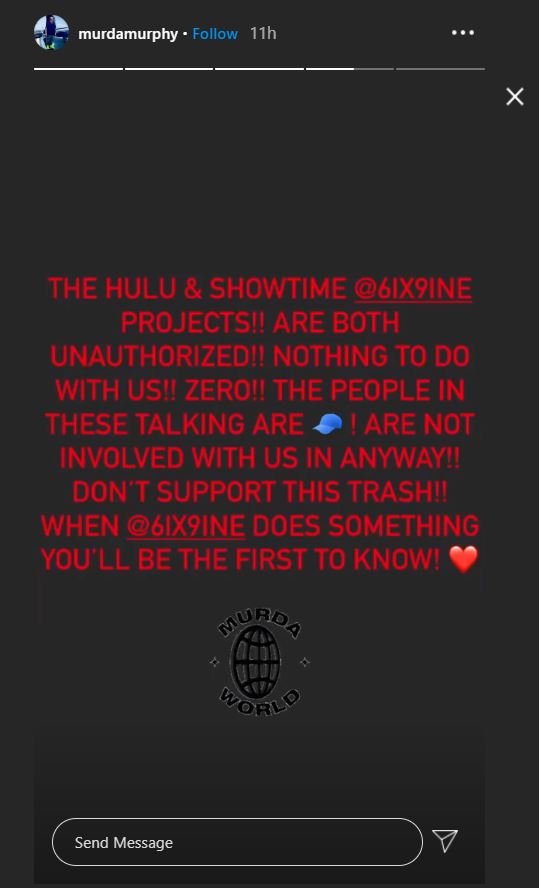 The manager says that the “69: The Saga of Daniel Hernandez” documentary is unauthorized and the rapper didn’t have anything to do with it.

The tale of Daniel Hernandez’s rise to fame continues to captivate audiences, and now it’s Hulu’s turn to share a documentary about Tekashi 6ix9ine. On Monday (November 16), Hulu unveiled 69: The Saga of Daniel Hernandez, a documentary directed by Vikram Gandhi that comes on the heels of Showtime’s three-part 6ix9ine series Supervillain. The already controversial features have struck a nerve in the rapper’s camp as his manager, Murda Murphy of Electric Feel Management, shared a few thoughts about both programs.

“The Hulu & Showtime @6ix9ine projects!! Are both unauthorized!!” Murda Murphy wrote on his Instagram Story. “Nothing to do with us!! Zero!! The people in these talking are [cap emoji]! Are not involved with us in anyway!!” He then encouraged 6ix9ine’s fans not to stream either documentary. “Don’t support this trash!! When @6ix9ine does something you’ll be the first to know! [heart emoji].”

The 69: The Saga of Daniel Hernandez film is described as “part investigative documentary, part real-life gangster movie” that chronicles the rapper’s life as a troll-turned-chart-topping artist who then adds his name into rap infamy as he becomes a federal informant against his Nine Trey Gangsta Blood associates.

Check out the trailer and Murda Murphy’s message below.

Russ Drops ‘CHOMP’ EP Featuring Benny The Butcher, Alchemist, Busta Rhymes & More | HipHopDX Subscribe Subscribe To DX Newsletter Get the most important stories in Hip Hopstraight to your inbox Thank You! Thank You! Thank You!You’re Far Too Kind To complete the subscription process, pleaseclick the link in the email we just sent you. Joining Newsletter Source link