6ix9ine Reveals Story Of How He Really Injured His Arm, Wasn't "Caught Lacking" 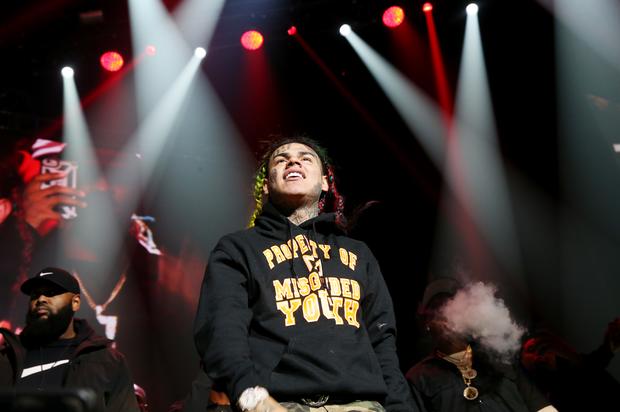 6ix9ine recently shared a video of himself as he was being treated for a wrist injury at the hospital.

He’s the king of trolling, so the public won’t be surprised to learn that Tekashi 6ix9ine’s recent injury didn’t come from any street brawl. As the rapper has been enjoying strolling around New York City while soaking in his newfound freedom from house arrest, critics have been anticipating the day when he gets into trouble out on the streets. Thus far, 6ix9ine has visited restaurants, gone to the mall, posed for pictures, and handed out cash to strangers. Aside from members of his security team getting involved in a scuffle with a man who was filming the “Trollz” rapper, 6ix9ine hasn’t run into any beef.

However, On Tuesday (August 11), 6ix9ine shared a video that showed he had an injured arm. In the clip, the rapper was being treated as a hospital and in the caption to the post he wrote, “I got caught lacking in these streets.” Not everyone believed his story, and later, TMZ reported that they spoke with 6ix9ine who revealed the true story of how he injured himself.

According to 6ix9ine, he was inside of his home, walking down his stairs at 3:00 a.m. to his kitchen when he accidentally tripped over his one-year-old French bulldog. As he was attempting to break his fall, his hand got caught on the banister and hurt himself. Initially, he thought he’d maybe bruised something, so he went to bed. By the next morning, the pain had intensified, so his team decided to take him to the hospital where an X-ray showed that 6ix9ine has broken a “bone in the back of his wrist.” His arm will reportedly be wrapped in a cast for three to five weeks.