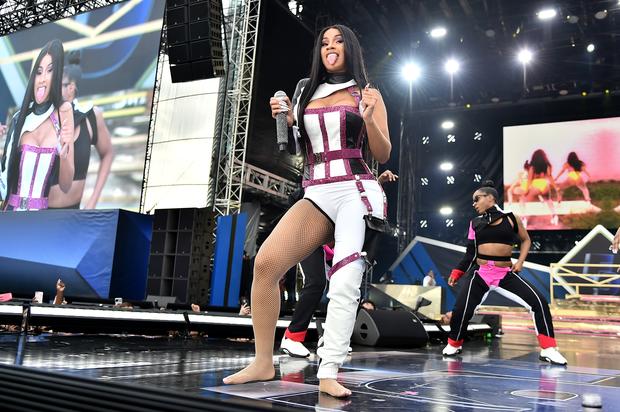 After the reveal of the alternate cover for her upcoming single “Up,” Cardi B’s back in the spotlight with a cameo in a Wayne’s World-inspired Super Bowl Ad by UberEats. The Super Bowl ad features Mike Myers and Dana Carvey reviving their characters, along with a surprise appearance from Cardi, in an effort to support local restaurants as part of UberEats’ “Eat Local” initiative.

Cardi posted the commercial to her Instagram with the caption, “The latest WAG (Wayne and Garth) special guest?! ME! Go watch and remember to #EatLocal with @ubereats  #ad.”

The ad pokes fun at commercials that use shady manipulation tactics and hop on the latest trends to sell their products– all the while doing just that.

In the ad, Wayne and Garth urge people to support local restaurants and surely do “not” manipulate the audience into eating local. Meanwhile,  “Eat Local” flashes across the screen and they hold up adorable babies with “Eat Local” shirts. The irony continues, as Wayne then says, “We’d never shamelessly rely on a celebrity cameo,” while Garth replies, “ Right, Cardi B?”

Cardi suddenly joins the duo with and the trio proceeds to “not” engage in the latest trends, by doing the swap-clothes TikTok challenge. The commercial ends with the trio singing an Eat Local song that mirrors the Wayne’s World theme song.

The commercial will air this Sunday during the Super Bowl on CBS.

Will you be tuning in to watch?

Trey Songz Posts Selfie Reacting To Alleged ‘Head Doctor’ Sex Tape — But No Denials | HipHopDX Subscribe Subscribe To DX Newsletter Get the most important stories in Hip Hopstraight to your inbox Thank You! Thank You! Thank You!You’re Far Too Kind To complete the subscription process, pleaseclick the link in the email we just sent you. Joining Newsletter Source link