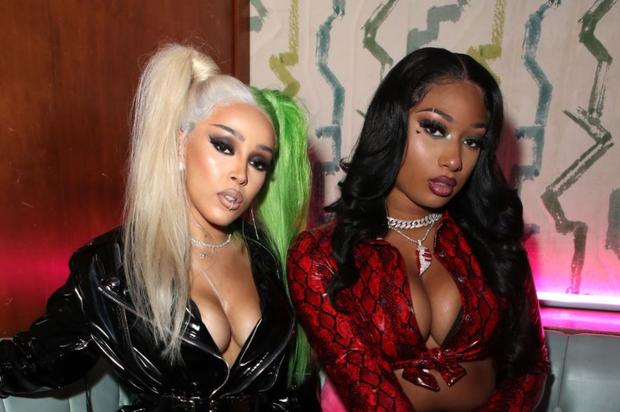 She was randomly asked about Meg’s shooting scandal at the American Music Awards.

It was a slightly awkward moment for Doja Cat as she had a moment with the press during the American Music Awards on Sunday. The singer-rapper took home two wins for Best New Artist and Best Female Soul/R&B artist, but it was what happened backstage that captured attention after she was asked about her friend Megan Thee Stallion. Doja was answering questions from the media when a journalist wanted to know what she would say to the “naysayers” who have accused the Good News rapper of lying about being shot by Tory Lanez.

The question seems random considering Doja hasn’t said anything about the incident in the past and isn’t involved in it whatsoever, but she gave an answer nonetheless. “Um, one, if you are trying to take somebody down for something that you have no idea about, like, one, we should trust her ’cause she’s the Stallion,” said Doja. “And also just…it feels like, I don’t know, it just feels like, why even do that? It’s pointless.”

“I don’t know. It’s a really sensitive topic, too,” she added. “It’s not even like you can just jump in and throw tomatoes. It’s not the environment for that kinda thing.” Check out the clip of Doja giving her opinion about Megan Thee Stallion below.

Nicki Minaj Airs Recording Academy Out For 2012 Best New Artist Grammy Snub: 'They Gave It To The White Man'

Nicki Minaj Airs Recording Academy Out For 2012 Best New Artist Grammy Snub | HipHopDX Subscribe Subscribe To DX Newsletter Get the most important stories in Hip Hopstraight to your inbox Thank You! Thank You! Thank You!You’re Far Too Kind To complete the subscription process, pleaseclick the link in the email we just sent you. Joining Newsletter Source link