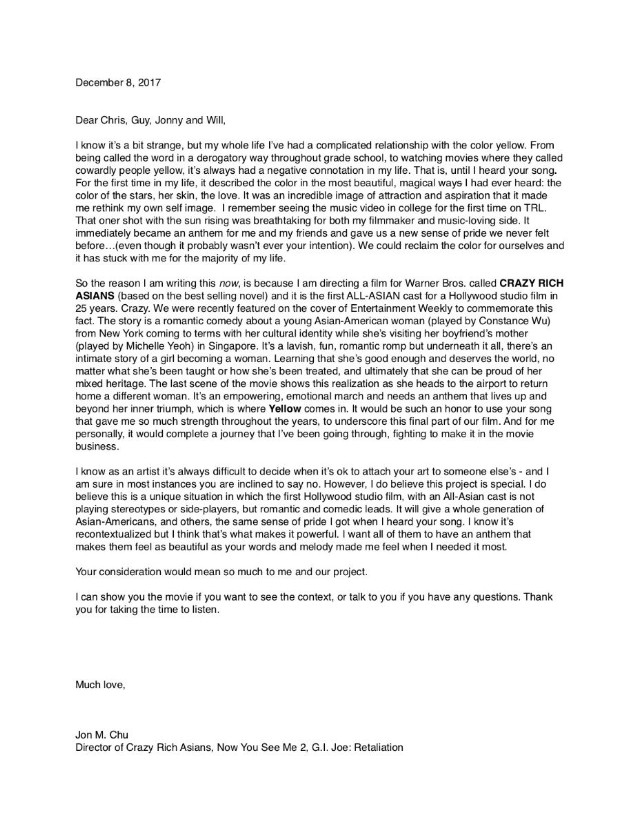 If you haven’t seen Crazy Rich Asians yet, you should. Aside from being an overdue and important turning point for representation in mainstream movies, it’s hilarious and heartwarming throughout. And it often makes deeply effective yet specific use of rom-com tropes and structures, like when a Mandarin cover of Coldplay’s “Yellow” soundtrack’s the film’s climax.

(This is the part where I say if you haven’t seen it and are trying to avoid mild spoilers, turn back now.)

Over the course of Crazy Rich Asians, there are a lot of familiar pop songs used in crucial sequences. “Can’t Help Falling In Love” appears during a wedding, and “Material Girl” soundtracks a central character’s transformation. As with the latter, the appearance of Coldplay’s early hit “Yellow” is familiar yet also reinterpreted, translated into Mandarin.

Given that it arrives at the end of the movie, “Yellow” has a lot of heavy lifting to do. While on its surface the song’s lilting-then-soaring melodies seem perfectly-calibrated for a big rom-com finale, there’s actually a lot of nuance it has to thread in Crazy Rich Asians’ conclusion. There are relationships breaking down and blossoming at the same time, a triumphant ending not without sadness at its corners. So when you first hear that melody from “Yellow,” instantly recognizable and yet sounding new thanks to it being in Mandarin, it manages to capture all the emotions in those scenes quite well. But it almost didn’t happen at all.

First, Warner Bros. held some concerns that the usage of a song called “Yellow” in a movie called Crazy Rich Asians would come across as problematic. But the song choice was far from unintentional. As director Jon M. Chu told The Hollywood Reporter: “We’re going to own that term. If we’re going to be called yellow, we’re going to make it beautiful.”

There was another hurdle in place for Chu: Coldplay initially denied the request to use “Yellow” in the film. In response, Chu first tried a couple of other songs in its place, but he couldn’t find one that summed everything up so well. So he penned a letter to Coldplay explaining how important the song was to him personally, how important it was to Crazy Rich Asians.

“I know it’s a bit strange, but my whole life I’ve had a complicated relationship with the color yellow,” Chu’s letter begins. “From being called the word in a derogatory way throughout grade school, to watching movies where they call cowardly people yellow, it’s always had a negative connotation in my life. That is, until I heard your song.”

Chu goes on to explain the beauty of the song to him, and how “Yellow” could resonate for that moment in the life of Crazy Rich Asians’ protagonist and for viewers alike. Read the complete text of his letter below.

After the letter, Coldplay apparently granted Chu permission to use “Yellow” within 24 hours. He then commissioned the Mandarin cover from Katherine Ho, a former contestant from The Voice. There are plenty of stories like this in movie history, of a director knowing the exact right song they need for a scene, and having to fight to make it a reality. It’s a good thing Coldplay acquiesced in the end: Especially once you know Chu’s reasoning behind it, it’s hard to imagine any other song playing as Crazy Rich Asians fades out.

Below, revisit Coldplay’s original and hear Ho’s version from the movie.

What's so good? Like most  people who turn 27, Young Thug has decided to celebrate by finally releasing his much rumoured Slime Language project. Enlisting the likes of Lil Baby, Lil Uzi Vert and Gunna along with producers Wheezy, Southside and TM88, Thug has dropped another enterprising collection of songs featuring his familiar auto-tuned cadence. Fans of modern rap will no doubt eat it up, with Thugger continuing his slow climb through the rap ranks to become a credible artist. […]