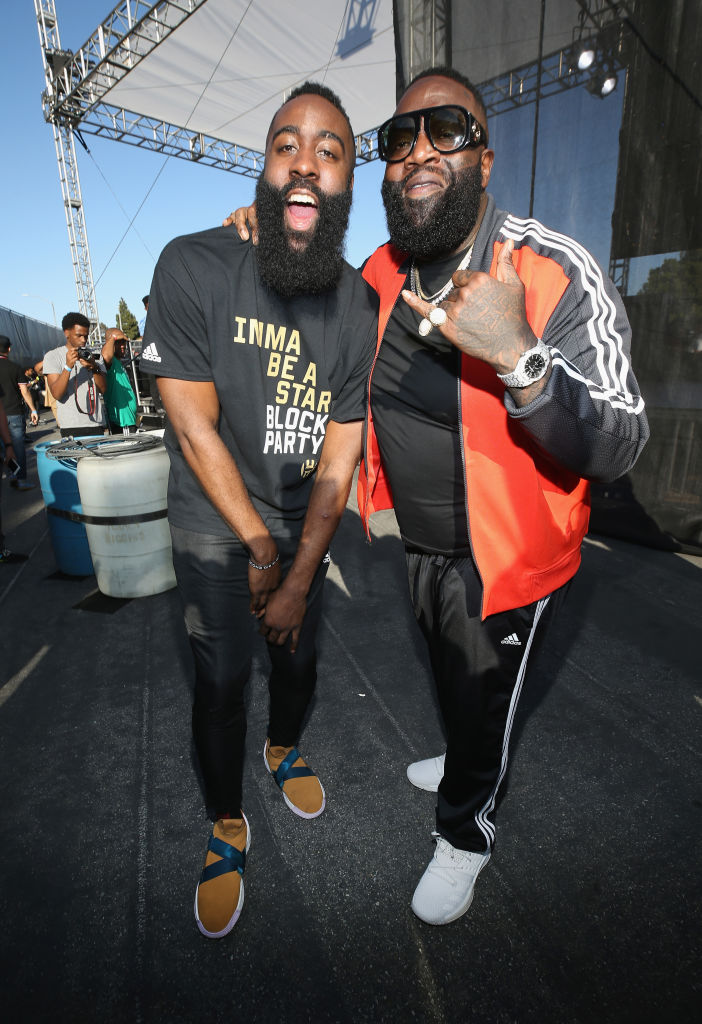 James Harden has seemingly gained weight during the offseason, prompting fans to get Rick Ross trending on Twitter.

Was that Rick Ross on the court last night for the Houston Rockets? Contrary to what thousands of NBA fans theorized on social media, the Miami-area legend was not suited up during the preseason… it was just James Harden, who has probably been partying a little too hard during the offseason.

As you surely know by now, James Harden has been missing in action for the last little while. At first, he seemingly refused to show up for work, choosing to party with Lil Baby instead of going to practice with the rest of the Rockets squad. At Baby’s birthday party, JH13 got him a bunch of gifts, including a Prada duffle bag filled with Honey Buns. Apparently, Harden got into that stash because, last night, he got Rick Ross trending on Twitter out of absolutely nowhere with his supposed weight gain, putting on his gear for the first time in months.

After apparently requesting a trade to the Sixers or Nets, Harden finally joined his current team for their preseason game last night, but people were more concerned with his appearance than his game.

“Who tf offered a 10 day contract to @RickRoss,” asked one fan on Twitter, posting a picture of James Harden. The photo shows the baller with his trademark beard, which Rozay shares, and a new belly that was sticking out a touch.

There are a few ways this can go. Either James Harden takes in the criticism and cracks down on his training and diet to lose the belly, or Rick Ross hears the world’s cries and does the same thing to avoid this happening again. Or, neither can happen and we could be in for a season’s worth of jokes about the Bawse.

Do you think there’s a resemblance?

Lil Durk & King Von Labelmate JusBlow600 Arrested For Murder + 6 Felony Counts | HipHopDX Subscribe Subscribe To DX Newsletter Get the most important stories in Hip Hopstraight to your inbox Thank You! Thank You! Thank You!You’re Far Too Kind To complete the subscription process, pleaseclick the link in the email we just sent you. Joining Newsletter Source link