Kap G Demands 6ix9ine Puts Some Respect On His Name 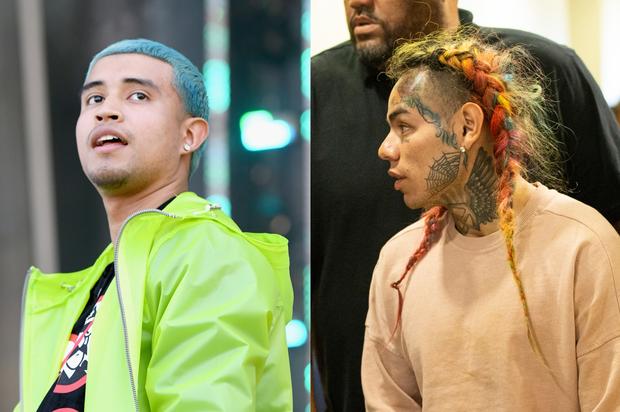 Tekashi 6ix9ine suggests he’s doing a better job at putting on for the Mexican community than Kap G.

Tekashi 6ix9ine always feels like he has a point to prove. Whether it’s being the biggest artist on the Billboard Hot 100 or the hottest artist on the ‘Gram, he’s attempted to rectify his sullied name by dragging others down. But regardless of what he says, it’s evident that his main goal is to get some sort of reaction.

A clip surfaced over the past few days of 6ix9ine discussing representation of Mexican people in hip-hop with a few individuals when Kap G’s name popped up. “Who’s putting on for our people right now?” 6ix9ine asked one of the interviewers. “No one puts on for our Mexican people.”

“The only person I can think of is probably Kap,” 6ix9ine continued. “But give me the last song Kap G put out?” he asked. “Alright. C’mon, man. I’m doin’ it for the Mexican people, you hear me.”

Kap G reposted the clip with the caption, “funny guy” along with a rat emoji then proceeded to demand the “PUNANI” rapper pays his respect to the “GOAT.”

“Y’all know I don’t do this Internet shit. But I had to let it be known — put some mothafuckin’ respect on my name,” he said. “Stop playin’ with me. Y’all know I’m the GOAT. Appreciate the GOAT while he here… Don’t act like I ain’t open doors.”

“I woke up this morning to a lot of tags, like, I ain’t representin’ — I ain’t the one representin’ for the Mexican community. I been doing that,” he added.

Peep his post below and sound off with your comments below.