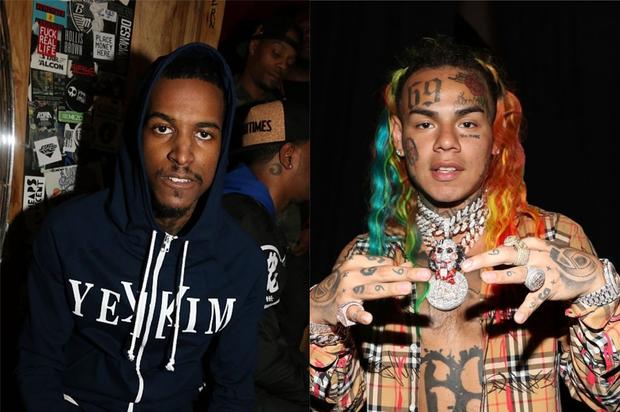 Lil Reese comes after Tekashi 6ix9ine and his girlfriend Jade for their incessant trolling, calling them both insulting names.

Tekashi 6ix9ine is currently in Chicago, Illinois, terrorizing his rival rappers from the city with each new post on social media. His entire modus operandi is to instigate right now. With an album releasing in a week’s time, the controversial rapper is trying his hardest to stir up the pot, antagonizing people like Lil Durk and Lil Reese to bless with him a new feud.

This week, he’s been going hard at Lil Reese, who has enough energy to act as his sparring partner. Although nothing will likely come of this, it all continues this morning with the Chicago rapper’s latest tweets, clearly aimed at 6ix9ine and his girlfriend.

After the rainbow-haired star spent much of yesterday trolling Lil Reese and posting re-enactments of him soiling himself during a beatdown, Reese has issued his most recent response.

“That n***a a bitch i a never go out like a pussy that n***a [cap] on a bald head lil trick ass Mexican,” wrote Reese on Twitter after waking up.

Then, he decided to get Tekashi’s girlfriend involved, calling her out and coming for her appearance.

What do you think will happen next? Do you think we’re in for a meeting between Tekashi 6ix9ine and Lil Reese in the streets?

Benzino Shows Off Incredible Hulk Physique While Promoting OnlyFans Page | HipHopDX Subscribe Subscribe To DX Newsletter Get the most important stories in Hip Hopstraight to your inbox Thank You! Thank You! Thank You!You’re Far Too Kind To complete the subscription process, pleaseclick the link in the email we just sent you. Joining Newsletter Source link