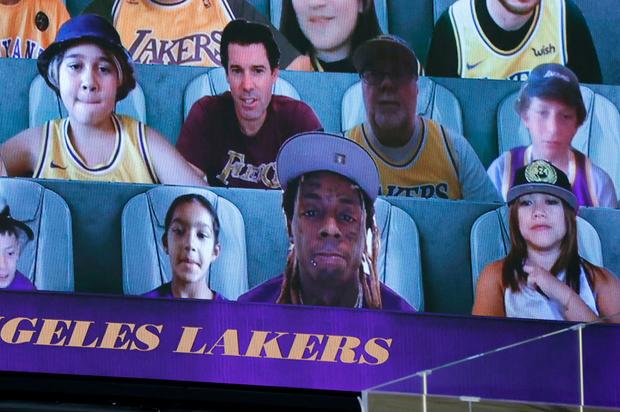 Lil Wayne was present at the Lakers Vs. Thunder game (virtually).

The Los Angeles Lakers have officially clinched the #1 position in the Western Conference to close the season, going into the playoffs with a head full of steam. Last night, they didn’t manage to come away with the win against the Oklahoma City Thunder but fans of the team are still hoping to walk away from this mess of a season with a championship. It would only be right to honor Kobe’s legacy with another ring.

Despite losing by a wide margin, the Lakers got their Celebrity Row back in check, inviting some famous faces to sit in the (virtual) courtside seats. As you surely know, you’re likely to go star-gazing once you step into STAPLES Center with the sheer amount of VIP guests that are sitting courtside on any given night. Well, at least during pre-corona times. Lil Wayne stepped up and appeared via webcam to spice up the crowd.

As the NBA attempts to give some semblance of normal to their gameplay to resume the season, they’re been featuring a crowd full of fans that have been webcammed in. One of the faces that viewers at home could keep their eyes on was Lil Wayne’s, who seemed ecstatic to be participating. At one point, he even gave a high-five to the woman sitting next to him (again, virtually).

Who would you like to see Zoom into the next game?