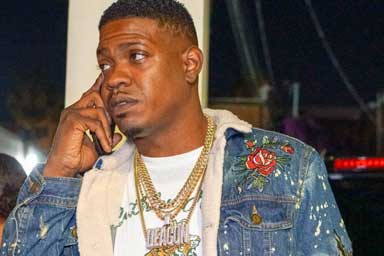 Da Deacon, who is half of the production duo OZ n Da Deacon, is an American record producer that has worked with and produced for many major artists. Now Da Deacon is taking a step from behind the scenes to take on the role of an artist to show the world just another facet of the many musical talents he has.

Born and raised in the neighborhood of Carol City in Miami Florida, Da Deacon’s love for music began at a very early age. He began playing the drums at the age of 8 and was also a drum player in the Carol City Junior High School Band. By the age of 18, Da Deacon was going to the recording studio with his cousin who was a music producer, and it was that early introduction to recording that influenced Da Deacon to pursue a career in the music industry as a producer.

Da Deacon first started making hip-hop tracks on the MPC 2000 and while in college he bought more recording equipment including the Korg Triton to grow further in his craft and create his own signature style. Fast forward to 2006, Da Deacon along with OZ received their first full industry credit production work on N.O.R.E.’s “Ya Tú Sabe” album (Roc La Familia). After doing further work as a producer for other R&B and Hip-Hop Artists, Da Deacon is ready to release his own solo project as an artist starting with the debut of his first single “Like 2 Party.”

Like 2 Party was inspired after a night out with friends and everything he said in the song, “…actually happened that night”. The single is a party anthem and something that everyone can relate to, which is a goal that Da Deacon has in mind every time he creates music. He is not afraid to push the envelope and hopes to add his own different element to music. Not only is he dedicated to music, but he also as a passion for helping others.

Growing up in the streets of Miami, Da Deacon, unfortunately, got into major trouble at the young age of 14 and found himself facing serious time. Although this led to road bumps, his desire to have something better in life pushed him to go forward with his dreams and to not take life for granted. It was his own personal road to redemption that led him to create a non-profit organization called the Above the Stars Foundation to help other at risk youths not make the same mistakes he did, and to show them that there is more to life then what you see around you in the streets.

Aiming to be a force to be reckoned with, Da Deacon is sure to bring a breath of fresh air to music. By showcasing his talent not only as an artist but as a producer, Da Deacon is definitely destined for greatness and will give the world the unexpected!