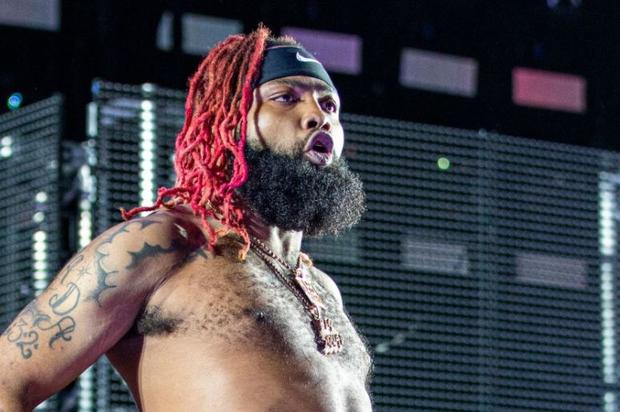 As people were preparing for a quarantine Halloween last year, Sada Baby found himself on the receiving end of Cancel Culture. Randomly, someone looked up old tweets from the “Whole Lotta Choppas” rapper, and soon, screenshots were circulating online. It seems that the controversy began after a Nicki Minaj fan page asked the rapper to promote the remix to his viral hit that featured the Queen emcee. Sada gave a snarky response, causing members of the Barbz to look through his years-old tweets where they found colorist and homophobic statements as well as tweets about sexual assault.

Sada initially was unapologetic about the scandal, but later, he returned with a video apology. During his recent interview with No Jumper, the rapper discussed being the target of Minaj’s dedicated fans. “I had to apologize and all that type of sh*t,” he said. “The crazy thing is, what I said is sh*t that I probably said, like, five times earlier that week. I think there was so much going on and her fanbase is like a cult. They like the BeeHive.”

“They went and found old ass tweets. I’m like, damn, I said that?” He was told that he should’ve pulled a preemptive strike and deleted his old messages. “I don’t use my Twitter,” Sada replied. “The label be on my Twitter, so like—but the sh*t that they found, at the time, I’m like, yeah. But I was young though… I think at one point in time on Twitter that was the thing to do at like, four o’clock in the morning,” he added. “It’s like competition to say the worst sh*t.”

Adam22 complained that nowadays, people are too sensitive and jokes are no longer as welcomed on social media because they often offend. Check out Sada Baby’s full interview with No Jumper below and let us know if you think Cancel Culture has altered the way people are able to express themselves online.

Charlamagne Tha God Admits Radio's Holes After Fan Complains About Roddy Ricch’s ‘Ballin’’ Still Getting Daily Spins | HipHopDX Subscribe Subscribe To DX Newsletter Get the most important stories in Hip Hopstraight to your inbox Thank You! Thank You! Thank You!You’re Far Too Kind To complete the subscription process, pleaseclick the link in the email we just sent you. Joining Newsletter Source link