SAINt JHN Cliques With Kanye West For "Pray 4 Me" 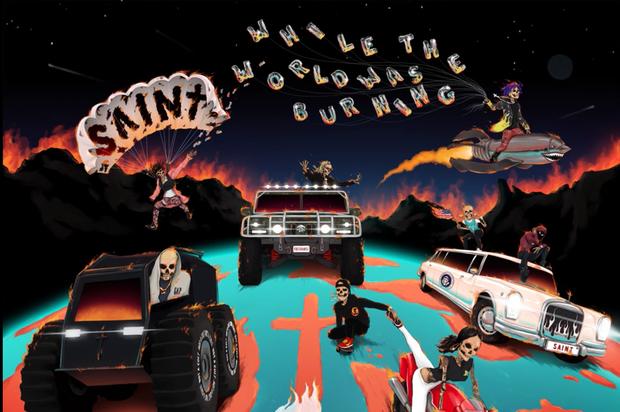 At the stroke of midnight, SAINt JHN came through to deliver his new album While The World Was Burning, an album title evocative of the beloved emo era. And though SAINt JHN has been known to wax melancholic on occasion, his sound is far more deserving of a deep dive. Case in point, this latest project from the melodist is a journey from start to finish, with “Pray 4 Me” standing out as an early point of interest — if only because it features vocals from a Presidential candidate.

Say what you will about the current state of Kanye West‘s music, but it goes without saying that his presence is still a draw. For the most part, Kanye opts to coast on his brief verse, but there are occasional moments of impressive lyricism and inspired rhyming. “They wanna ask, “Is he well?” when my mind’s on Israel,” he spits. “I know that I’ma live to tell that we lived through a livin’ Hell.”

As for the man of the hour, SAINT JHN opts to show restraint, floating over the atmospheric production with a reflective verse. “Meek tryna lower the maxes, Trump in the House tryna lower the accents,” he muses, after requesting the song be played for his mother in the event of his death. “Real life movie, I don’t know any actors I’m just tryna move forward, they keep pullin’ me backward.”

Check it out for yourself now, and be sure to check out SAINt JHN’s While The World Was Burning right here.

My life now, this highlight now
Just play my mama this if I die right now
Before I close my eyes, before I lie down
Whenever I hang my hat, I’ll never hide my crown

DaBaby Channels His Emotions To Deliver Surprise 'My Brother's Keeper (Long Live G)' EP | HipHopDX Subscribe Subscribe To DX Newsletter Get the most important stories in Hip Hopstraight to your inbox Thank You! Thank You! Thank You!You’re Far Too Kind To complete the subscription process, pleaseclick the link in the email we just sent you. Joining Newsletter Source link