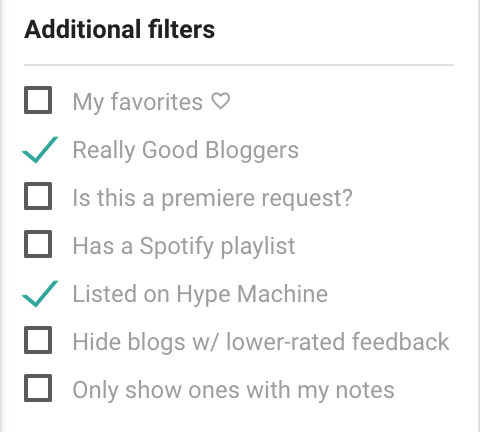 Hello! We’ve seen a lot of people use SubmitHub, and have noticed that some strategies work better than others. So, we’ve pulled together the below guide to give you some tips on how to use SubmitHub.

For more than a decade, blogs had a huge influence on the music industry. Over the last few years though, a lot of these blogs have lost their day-to-day audience to streaming services like Spotify and Apple Music.

Blogs are still really important, and can play a huge role in accelerating your career. How?

Music blogs still have a very influential group of regular visitors: industry professionals, including teams at big streaming services and A&R scouts from major labels. A feature on a blog could land you in a Spotify editorial playlist, see you included as part of a Netflix soundtrack, or sign you a big deal with Universal Music Group.

Right, so how do you make that happen? Especially when the blogs are so picky…

There are lots of blogs on SubmitHub. Some of them are more influential than others. To find them, use the filters to search for two types:

On the whole, blogs tend to be a little bit pickier about who they provide coverage for. Contrary to what many might believe, having a large audience or an “approachable” sound might actually backfire for you when sending to blogs. Think of them like the kids at school who created mixtapes for everyone else — they’re excited about finding something first, and take pride in being a step ahead of everyone else.

Generally speaking, the higher the blog’s approval %age, the lower the quality of the coverage is going to be. This isn’t true for everyone, so we advise visiting the blog first to get an idea of what they tend to provide. You can also locate stats about the blogs sharing tendencies in the notes section when submitting.

So, if blogs are picky and hard to get coverage on, how can you improve your chances of getting coverage? That leads us to strategy #2…

Blog Strategy #2: Try to get a “premiere”

A premiere is when you tell a blog that they will be the first outlet to announce your song to the public, and that you will share their write-up with all of your fans when they do so. Offering a premiere to a blog will often increase your odds of being approved because they a) like to be first; b) like that you’re going to send all your fans to visit their website for the launch. A premiere doesn’t mean you can’t put your song on Spotify or Apple — it just means that you’re going to promote the blog’s write-up when you announce your new song.

You can create a “premiere” campaign by using the “Is this a premiere request?” filter while selecting blogs. In case it wasn’t obvious, you’ll want to upload a private unreleased song to SubmitHub to shop around to the blogs — you can’t premiere a song that has already been available to the public. Premieres are on a first-come-first-serve basis, so if you manage to secure one, don’t offer it to anyone else or you might risk losing the first one.

Once you’ve gotten an approval for your premiere, you can create another campaign targeting all the other blogs for a regular release — just make sure you’ve attached a “release date” to your upload on SubmitHub so that they know that they shouldn’t publish their coverage until the first blog has premiered it.

Blog Strategy #3: “Throw pasta at the wall and see what sticks”

There are a lot of blogs on SubmitHub and not all of them take premieres or are part of the Hypem and RGB communities. That doesn’t mean they’re not worth sending to, because you never know what a blog post could lead to or who might view it. If you’ve got the extra budget, it’s definitely worth sending your song to as many outlets as you can. Even a small write-up that gets viewed by 20 people could open the doors for something much bigger. Not to mention that it can help build your search engine ranking…

With this approach it’s still recommended to do some research to make sure you’re not going to totally miss the wall when you throw the pasta! Try visiting their website to see what kind of music they’re into.

Blog Strategy #4: Just give me coverage. Any coverage.

Feeling bummed out about all the rejections? Try create a campaign that targets all the outlets with a really high approval rate. The quality of their shares might not be so good, but at least you know you’re dramatically increasing the odds of getting your name out there.

Another set of influential outlets on SubmitHub come in the form of YouTube channels. These folks will upload your song to their channel, exposing it to their user base. You can visit their website to get an idea of how many plays their uploads typically generate.

When sending to YouTube channels, the majority of them will ask you for copyright permission to monetize the upload — this is how they make money to keep their channels running. You’ll still have complete control over your song everywhere else, it’s just that on their specific channel, they’re asking you for permission to keep the earnings.

For some artists, giving monetization permission is a no-no. But for others, it’s totally worth it. A good YouTube channel can generate thousands of plays for your song, and many of those listeners will end up looking you up on Spotify, so you end up earning money there anyway.

YouTube channels also tend to upload songs less frequently than other outlets on SubmitHub; i.e. one per day. That means they might like your song, just not enough for the top spot, and will share your music on their smaller SoundCloud or Spotify, or in a playlist on their YouTube. And again, the alternative is no coverage at all, which is something to keep in mind!

There are three types of Spotify playlists:

Your ultimate goal is to get included in editorial playlists on Spotify (#1). This is very hard to accomplish. While Spotify has a tool in their artists dashboard that lets users submit to their editorial teams, the chances of being featured are slim to none. So, your best way is to get a bunch of independent playlists (#3) so that Spotify’s algorithms (#2) notice you, causing you to pop up on the radar of their editors (#1).

So, how can you use SubmitHub to increase your Spotify plays? First up, don’t expect tens of thousands of plays overnight. But, you can work your way there with these two strategies:

Spotify Strategy #1: Target the playlists who generate lots of plays.

Next to each playlister on SubmitHub you’ll see an “Avg plays” number. This is based on data we’ve collected from artists who use SubmitHub. Click on this to see a breakdown of how each of their playlists. Some of them can generate a few thousand plays, and at roughly $4 per 1,000 streams, you’ll earn your money back real quick.

Spotify Strategy #2: Target as many playlists as you can, no matter how small they are, because it sends a good signal to Spotify’s algorithms.

It’s widely believed that Spotify’s algorithmic playlists look at how many playlists you’ve been added to when deciding whether to include your song or not. So, a lot of labels and publicists will send to every independent playlister they can because they know that even if it doesn’t get them many plays, it will have a positive impact on their chances of getting included in the algorithmic playlists.

Put another way: the more independent playlists you’re included in, the more likely Spotify is to put your song in their algorithmic and official playlists.

Things to be aware of when sending to Spotify playlisters… 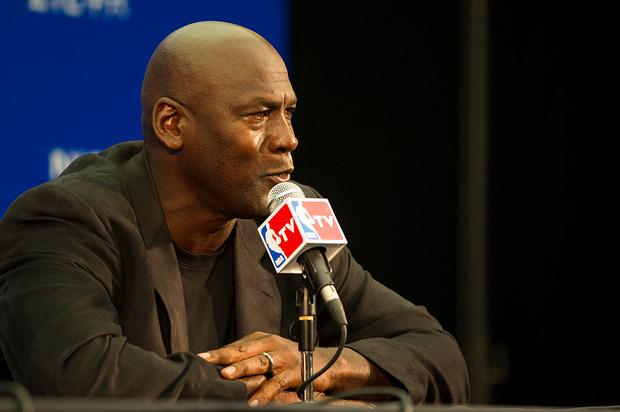 MJ encourages fans to donate and assist in Hurricane Florence relief and recovery efforts. The Charlotte Hornets and team owner, Michael Jordan, are teaming up with the NBA to begin Hurricane Florence relief efforts. The hurricane made downfall in North Carolina Friday morning and by the time the storm finally stops the area will face daunting reconstruction efforts which will cost millions of dollars.According to NBA.com, MJ, the Hornets organization and the NBA have already begun […]