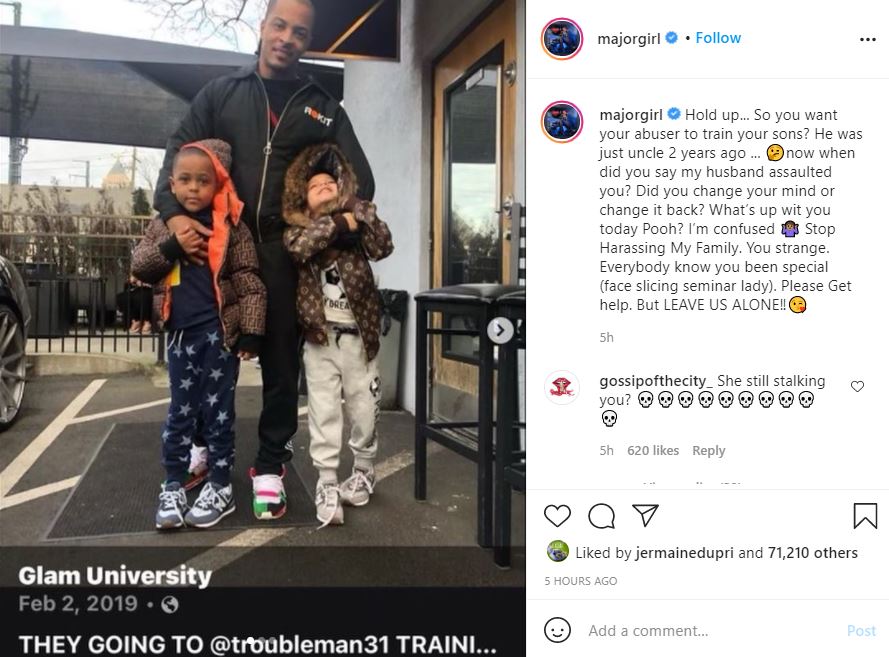 Their ongoing feud with former friend Peterson has reached new heights as she speaks with a woman who claims she was assaulted.

The tension between T.I., Tiny, and Sabrina Peterson has intensified. Earlier today (January 26), Peterson, who was once good friends with Tiny, took to her Instagram page to publicly accuse T.I. of putting a gun to her head. She wrote in a caption to her post that the “public praises predators” while listing off allegations against Tip, and soon, Tiny responded by defending her husband’s character.

That wasn’t the end of the back-and-forth now that Peterson has returned with another video where she filmed herself speaking with an unnamed woman. The person on the phone shared her story of an alleged interaction with and said, “It’s just a shame… I’m seeing all this stuff happen and these people don’t believe you,” the woman on the phone told Sabrina. “They don’t know who these people are behind closed doors. These people ain’t who they ‘posed to be.”

Sabrina then told the woman that she planned on talking to a number of alleged victims that have had encounters. “I know a lot of y’all are scared to speak out but, don’t be scared,” said Sabrina. The woman responded that people will think that she’s “doing this for clout” but argued, “Who the hell gon’ lie about rape? I was 16. They drugged me.”

Immediately, people began to question these shocking claims because the woman remained anonymous. Others have expressed doubt in Peterson’s story, as well, because there were reported photos showing that she allowed her children to spend time with the Harris’s after the alleged gun-wielding altercation with T.I. Swipe through below to hear Sabrina Peterson’s phone conversation with the anonymous accuser.