The 10 Flyest Female Rappers of All Time 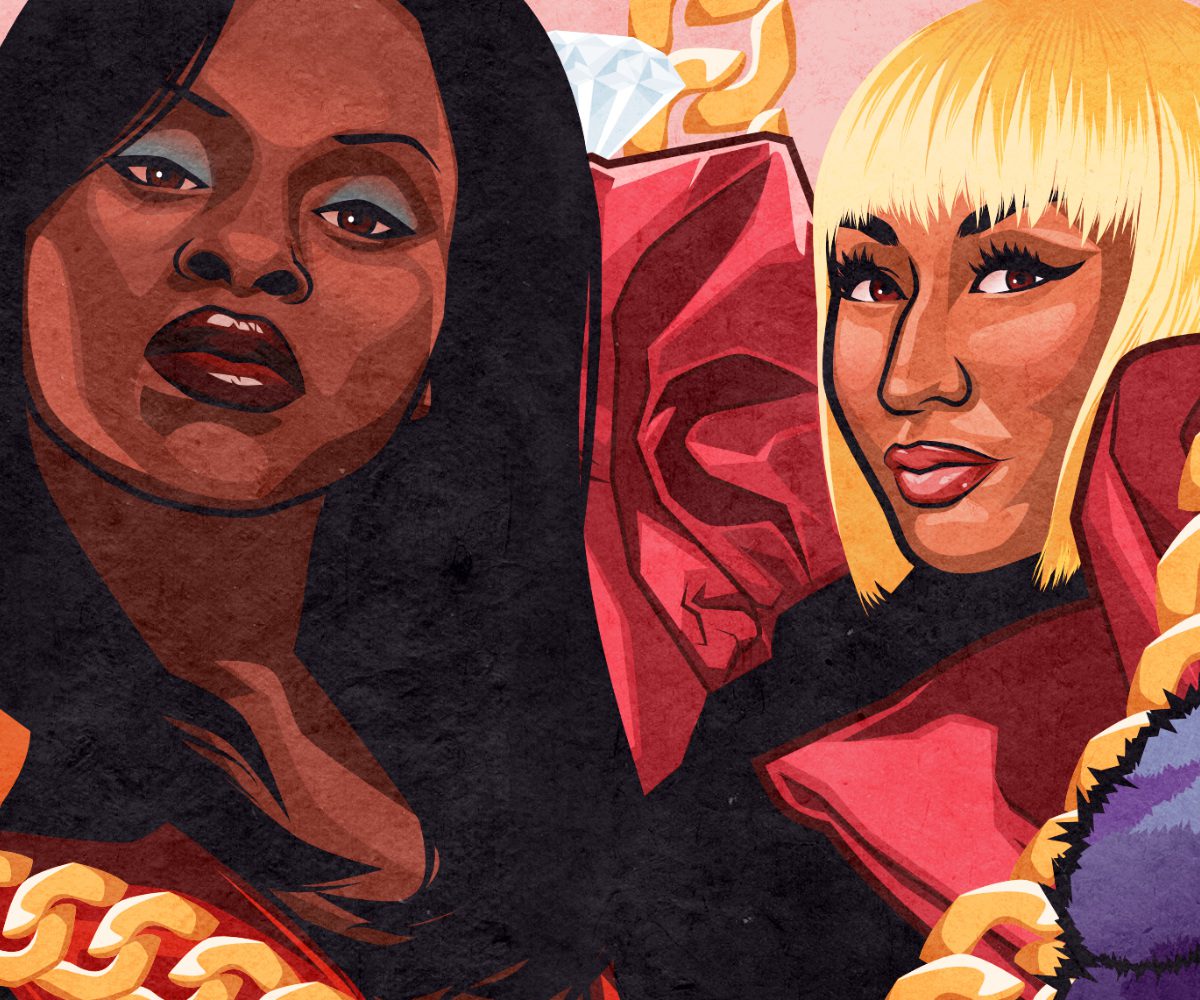 
Robyn Mowatt is a Staff Writer at Okayplayer where she…

From Lil’ Kim to Cardi B, these are some of the flyest female rappers in hip-hop that aren’t just rap stars but style stars, too.

Hip-hop has always had an ongoing dialogue with fashion. Since its creation, the genre has had a symbiotic relationship with style, beginning with the B-boy and DJ era. With the advent of rappers, hip-hop only continued to grow as a source for fashion inspiration, and women have — and continue — to play an important part in that. In celebration of the 49th anniversary of hip-hop, we’re taking an immersive look at the flyest female rappers who have navigated being both rap and style stars, and paving the way for their successors in the process. No matter the era they’re a part of, these women made statements on red carpets, in music videos, and beyond, helping solidify the ongoing dialogue rap continues to have with fashion.

Salt-N-Pepa’s personal style was juxtaposed amid the cultural raucous of the ‘80s when there was still a stigma attached to Black women being so open about sex and sensuality. The pinnacle of their stylish reign was captured in the “Push It” video, where they donned eight-ball jackets created in collaboration with Dapper Dan and Kid ‘N Play’s Christopher Martin. But they had other fashion contributions, too: color-blocked bomber jackets, leather co-ords, oversized denim fits, and blunt asymmetrical bobs. Salt-N-Pepa’s catalog was one of the first modern examples of the depth of women’s creative complexity: how we can be cheeky, sexy and soft, yet powerful and incredibly self-aware — all at the same time. —Bianca Betancourt

An innovator who incorporated haute couture and ghetto fabulous elements, Lil’ Kim is the fashion blueprint for women in rap. With her iconic styling partnership with Misa Hylton, Kim turned the unimaginable into moments that have led to countless recreations over the years. From runways to Halloween, many of her most memorable looks have added to her repertoire as a fashion pioneer. From loud pops of colorful wigs and mink coats, exotic animal prints, and designer monogrammed pieces to risqué pieces inspired by Dancehall culture, the anatomy of Kim’s icon status in hip-hop is layered by her presence both on and off the track. A muse for designers such as Marc Jacobs and Donatella Versace, she became a fixture for couture magazines and photographers like David LaChapelle. In the words of longtime stylist and fashion collaborator Misa Hylton, “She made fashion come to her.” —Kia Turner

She stepped into the scene with sheer confidence, a commanding flow, and raunchy lyrics to match. At the tender age of 17, Foxy Brown began carving out a space for women within the male-dominated landscape of ‘90s rap. But beyond her musical genius and ability to outshine her male counterparts, her love for fashion was felt in every appearance and everything she touched. The self-proclaimed “dark-skinned, Christian Dior poster girl” became a muse to John Galliano and Calvin Klein, and frequently pulled up to red carpets wearing Gucci, Tom Ford, and — of course — her signature minks. Like her music, the fabrics she wore complemented her overall style, making her one of the illest — and most fashionable — to ever grace the booth. —Maria Mora

It seems impossible to think of Queen Latifah’s style without the very thing her moniker signifies — the almighty crown. The iconic rapper and actress was notorious for pairing regal headdresses with vibrant threads, incorporating the African diaspora liberally. Snapshots of her Nature of a Sista’ album cover and HBCU paraphernalia on Living Single come to mind, for starters. But her fedoras, baseball hats, and newsboy caps also showed how savvy she could be in her casualwear, too. She also forged her own lane of empowering style in an era where “curvaceous” celebrities like herself were the exception. —Nia Groce

There’s no debate as to who is truly “Supa Dupa Fly” when it comes to Misdemeanor herself. With her outfits and costumes often reminiscent of theater, her creativity has thrived through her idea of reinvention, making her one of hip-hop’s most beloved fashion icons. Her early 2000s bedazzled Adidas tracksuit and sneakers that were a homage to ‘80s hip-hop, the iconic black blow-up garbage bag from “The Rain (Supa Dupa Fly),” the fur-trimmed orange suit and gold gown with exaggerated collar for the “Beep me 911” video, her denim on denim ensembles during her Gap run, and even her Aaliyah-pink and white tribute jacket from the 2001 MTV VMAs. Missy’s androgynous style paired with her flair for fashion has made her the tomboy style icon for women in rap. —K.T.

Eve, Ruff Ryders’ First Lady, is well known for her ability to capture hip-hop listeners’ attention through her sharp wordplay. However, the Philly-bred rapper was also a major style star who constantly fused street style with high fashion. On red carpets throughout her rap career, she has frequently worn Fendi, Tom Ford-era Gucci, and Chanel. In tandem with designer garbs, Eve also boldly sported statement makers like floor-length fur coats, mini skirts, wife beaters, and striking hair colors. The height of her experimental style moments can be seen in her “Let Me Blow Ya Mind” video, where she leaned heavily into a biker chic look topped off by a color-blocked leather jacket with feminine pieces. At one point, her briefly successful Fetish line provided a lens into how deep she was willing to push her ideas in the fashion space. Eve’s style legacy is marked by how she always gave off a “girl next door” aura while showcasing her tomboy-inspired versatility. —Robyn Mowatt

Trina is a Miami rap pioneer who’s always played the game by her own rules. A timeless beauty who is affectionately known as the “Diamond Princess,” Trina’s looks over the years have always featured a sparkly flair of sorts. Her glimmer dates back to her debut in the early 2000s. In Trick Daddy’s infamous “Naan N*gga” music video, she donned a diamond bedazzled bralette with a matching choker and Chanel earrings. Apart from her sultry lyrics in the hit single, Trina’s shimmery garb set the tone for years — and acts — to follow. —Shelby Stewart

Lauryn Hill doesn’t follow trends — she sets them. The “Doo Wop” rapper’s maximalist style didn’t start with her clothes, though. It began with her beauty: from her long locs to low fro and deep burgundy and brown lipstick colors, Lauryn wasn’t afraid to experiment. Even when it comes to wearing runway brands she models it with her own flair. Her floor-sweeping gowns, baggy denim, knitted kufi hats, and hair wraps — she has made statements with any clothing she was draped in, and it made a cultural difference. In an industry where women rappers are notorious for wearing body-hugging garments and showing skin, Lauryn gives us the unexpected and the unorthodox.  —Asia Milia Ware

When Nicki Minaj unleashed Pink Friday over 10 years ago, she solidified her spot as the hottest female rapper of that era. Alongside the accolades she’s been stacking over the years, she also has heavily experimented with her personal style. In the mid-2010s during her Young Money days, she donned outlandish, campy red carpet fits paired with eccentric blonde wigs (the height of this style era is documented by her “Super Bass” video). As the years went on, she embraced a sleeker look and wore the likes of Alexander McQueen and Tom Ford. In recent years, she has continued to keep people on their toes by donning custom pieces by Alexandre Vauthier Couture, Off-White, Pamela Rolland, and Marc Jacobs. The Met Gala, where she’s a regular invitee, has also allowed her space to push convention aside, where she’s collaborated with Prabal Gurung, Burberry, and even H&M on custom pieces. What encapsulates Nicki’s status as a style star is the fact that she has managed to morph from a style chameleon to a woman who’s sure of her fashion choices. —R.M.

Cardi B, like many of her predecessors, proudly sits within the intersection of fashion and hip-hop. The rapper is, simply put, a fashion chameleon. She can effortlessly go from elevated streetwear to a full custom Schiaparelli look, staying true to her native Bronx aesthetic while simultaneously pushing the bounds of fashion. It’s couture yet relatable. Since her debut, fashion and Cardi have become so intertwined. From performing at the 2017 BET Hip Hop Awards wearing then-emerging designer Christopher John Rogers to accepting her first Grammy in 2019 wearing a white, fringed archival Mugler gown, Cardi has become one of contemporary hip-hop’s most fashionable figures. —Shelton Boyd Griffith 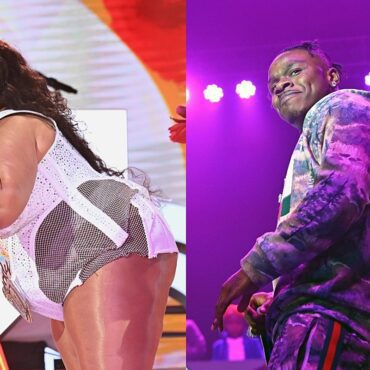 DaBaby Keeps Flirting With Lizzo on Her Butt Posts

DaBaby can't seem to get enough of Lizzo's backshot visuals on Instagram.Yesterday (Aug. 10), Lizzo shared photos and video from her current vacation on IG. In the posts, Lizzo is enjoying some fun in the sun on the beach. One series of pics begins with a photo of Lizzo's bikini-bottom clad cakes front and center. DaBaby commented on the post with anger and hand waving emojis, seemingly insinuating he wanted to give […]