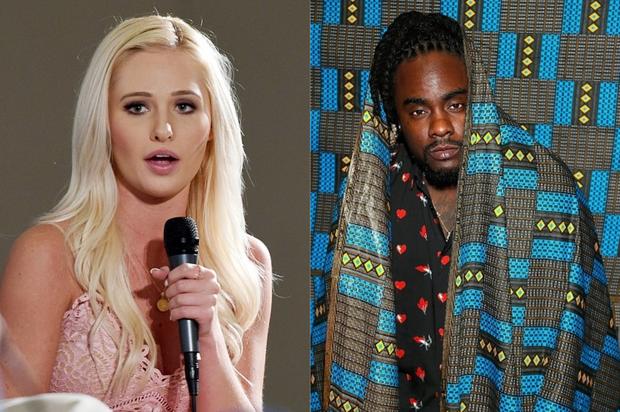 The rapper fired shots at the conservative commentator in his “Good Vibes (Za)” record.

Back in 2017, right-wing political commentator Tomi Lahren and Wale got into a particularly peculiar beef when the DMV native trolled the former conservative talk-show host in his politically charged track “Smile.” “Maybe I should meet Tomi Lahren, I’ll Lauryn Hill her,
Train her; she miseducated anyway,” he rapped on the track, deliberately mispronouncing Lahren’s name as “Tammy” on the track. This sparked some shots being fired between both parties over the years. The 36-year-old is taking aim again at Lahren again in his latest single “Good Vibes (Za) “, reigniting their dated feud.

On Tuesday, Wale surprised fans with the release of a new single commenting on the state of the country. “Cool story whole country been cold blooded,” he rapped on the track. “Tell Tammy Lawrence and Candice O’Neal it’s nothing,” again trolling Lahren by purposely mispronouncing her name.

A few days after the record dropped, Lahren took to her notoriously confrontational Twitter account to respond to Wale with a sarcastic but dismal response. “Glad @Wale is still obsessed enough with me to put me in yet ANOTHER song. Thanks, bud!” she penned Thursday (January 21st) evening.

A few moments later, Wale explained to the Tomi that he was just “documenting history” adding, “I also mentioned the idiots that stormed the Capitol in the song.”

Tomi had yet to fire back at Wale, but it’s no telling where this unpredictable feud could go.

Tory Lanez Responds To Megan Thee Stallion Shooting Fervor With DaBaby Collaboration Teaser | HipHopDX Subscribe Subscribe To DX Newsletter Get the most important stories in Hip Hopstraight to your inbox Thank You! Thank You! Thank You!You’re Far Too Kind To complete the subscription process, pleaseclick the link in the email we just sent you. Joining Newsletter Source link