Tory Lanez Flirts With Lizzo As She Twerks On "Quarantine Radio" 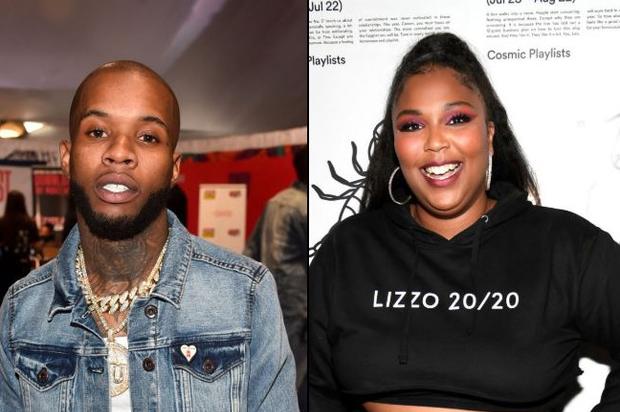 Tory Lanez got Lizzo to twerk on his Instagram Live after she was shut down by Diddy.

She may have been shut down by Diddy, but Tory Lanez had no problem letting Lizzo shake it fast on his Instagram Live. During these last few weeks, as much of the world has been cautioned to stay inside due to COVID-19, Tory Lanez has been entertaining hundreds of thousands of viewers on Quarantine Radio. The singer-producer’s official-unofficial Instagram series has featured a number of artists, but the main attractions have been his twerking contests.

On Easter Sunday, Diddy grabbed his kids and hopped on Live for a few hours. He spoke to artists, held a dance party, and overall just wanted to spread a little love during the quarantine. At one point, Lizzo joined Diddy and the Combs Cartel on Live and was just about to get into her twerk groove when Diddy shut things down. Later, Draya Michele joined the Live and was allowed to shake it, leaving viewers to accuse Diddy of being “fatphobic.” The music mogul later issued a statement saying the song Lizzo was dancing to had too many curse words in it and that’s why he turned it off.

Tory Lanez popped up again for Quarantine Radio and let Lizzo back that thing up. “There’s no discrimination at Quarantine Radio,” Tory said. “We like ’em big, we like ’em small. Let’s go baby girl!” Check out these two below, including Tory’s face when Lizzo revealed she wasn’t wearing any underwear.

DXCLUSIVE: Tay Keith Talks Collaborating With Fast Cash Boyz For Debut Album 'Fuck The Cash Up' and single "Bad Habits" | HipHopDX Subscribe Subscribe To DX Newsletter Get the most important stories in Hip Hopstraight to your inbox Thank You! Thank You! Thank You!You’re Far Too Kind To complete the subscription process, pleaseclick the link in the email we just sent you. Joining Newsletter Source link