Chance the Rapper recently dropped his album, The Big Day, after much anticipation. The album has many collaborators from artists like Megan Thee Stallion and Death Cab for Cutie. Chance has now shared a homemade lyric video to his track “Hot Shower,” which features DaBaby and MadeinTYO. The video is filled with visual puns and shows a corresponding image to each lyric of the song.

The video begins with a message from Chance. “Sorry ’bout the break. Had to get a new laptop,” he began. “I appreciate those of you who stuck with me. This video too forever so you better enjoy it (jk think whatever you want). Epilepsy warning I think (idk the triggers but this seems like one).”

Chance debuted the lyric video on his Instagram page. “Hot Shower but every word is a picture,” he wrote in the caption.

The song’s first lyric, “I got muscles like Superman trainer,” has clever matching images. An eye, an animated Game of Thrones cast, drawn muscles of a face, the “like” emoji on Facebook, a dog dressed in a Superman costume walking on a treadmill, and an unflattering photo of Meghan Trainor appear on the screen. 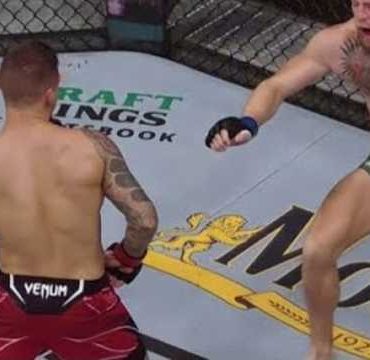 Oh Nah: Conor McGregor Breaks HIs Ankle In The First Round Against Dustin Poirier At UFC 264!

McGregor broke his ankle in the first round against Poirier. Posted By Persist Source link