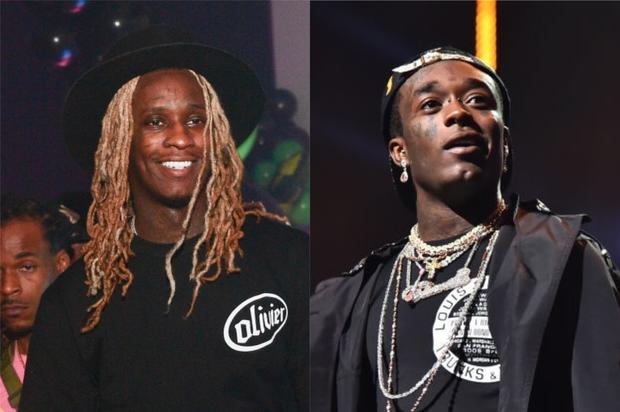 Lil Uzi Vert has a lifelong supporter in Young Thug.

Everybody is talking about Lil Uzi Vert and his brand new jewelry acquisition: a $24 million diamond implanted right in the middle of his forehead. The Philadelphia rapper seemingly got the diamond pierced to his forehead this week, showing off the pink gem on multiple occasions, which he has been paying off for the last four years. The 11-carat diamond is stunning, but it hasn’t been accepted by everybody on social media, who have been poking fun at the rapper for such a reckless purchase.

His fellow rappers, so far, haven’t been rocking with the new pick-up either. Sauce Walka, in particular, has been calling out Lil Uzi Vert for supposedly stealing his swag, pointing out the $250,000 diamond teardrop that he had implanted on his face in December. Uzi later revealed that Lil B, the one and only Based God, was the real inspiration behind his new forehead diamond.

Despite the fact that not many of his peers have spoken out in support of the diamond yet, Young Thug might be kicking off the fray by praising the rapper and predicting lots of success with the ladies in the future.

“Slime rule the world, believe it,” said Thugger on Instagram Stories. “Young n***as out this motherf*cker spending $24 million on they heads. N***a put $24 M on the front of they head. Y’all hoes get in line.”

Are you a fan of his new look?

The Weeknd To Resume His R&B Album Of The Year Season Come 2022 With After Hours World Tour | HipHopDX Subscribe Subscribe To DX Newsletter Get the most important stories in Hip Hopstraight to your inbox Thank You! Thank You! Thank You!You’re Far Too Kind To complete the subscription process, pleaseclick the link in the email we just sent you. Joining Newsletter Source link